5 Traps to Avoid When Balancing Roles of Leading and Managing 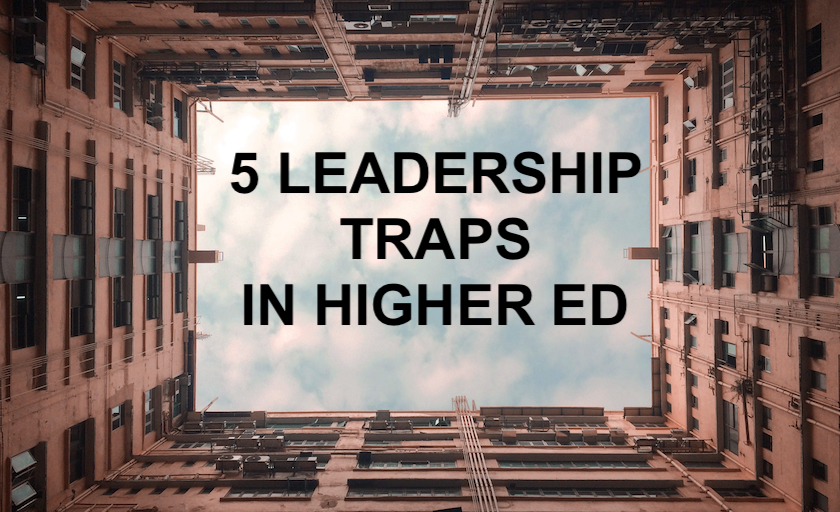 This article describes five traps higher education executives face when trying to become more effective in their role of leading innovation and change for the future when daily pressures conspire to keep them focused on managing the crises of the present. Larry Smith shares lessons learned from more than 40 years as a higher education executive, coach and consultant.

All higher education executives – presidents, provosts, vice presidents and others – are expected to be both leaders and managers. As leaders they are expected to look to the future and prepare the people of the organization to thrive in changing times. Leaders are expected to challenge the status quo and take risks. As managers, executives are expected to focus on the here and now, converting resources into results and make sure results are achieved while keeping operations under control. These are the two major competing functions embedded in the DNA of the executive leadership function. Keeping the two in balance is the challenge.

When I have asked leaders what they need to do to be successful, many identified the traps that prevent them from being more effective in preparing their organizations to change. Here are the five that I heard most often.

Trap #1: Not having a clear vision for the university or college that provides a future picture of success and that inspires and guides all action.
Former First Lady Rosalynn Carter noted that “a leader takes people where they want to go. “A great leader takes people [and their institutions] to where they don’t necessarily want to go but ought to be…and by going against the tide, a leader will sometimes boost rather than undermine his or her credibility.”

Having a clear and inspiring vision is requisite for long term success. Colleges and universities are value infused and self-perpetuating that too often look to the past instead of to the future for inspiration. A successful leader must develop a vision for the institution that is public and shared. Not having a strategic process for creating it and giving it life is a major trap. It can be seen when new presidents decide to take the first year listening to what everyone thinks without bringing their own point of view to the inquiry. The result is that the new president ends up with a plan that is held hostage to the present.

Experience tells us that people support what they help to create. Engagement is central to the change process. But it is also essential that presidents can describe a vision of what a thriving future for the institution will look like. This is a key leadership requirement. It is not the only requirement but may be the most important one. A classic example of this kind of leadership vision is when John F. Kennedy put the power and prestige of his presidency behind his call to put a man on the moon as a national goal. “We choose to go to the Moon” is the famous quote from his speech in September 1962. The speech persuaded the American people to support the Apollo space program at a time when cold war tensions were high, and the Soviet Union was leading in the space race. Critics objected that a moon program was a diversion from military research and a waste of taxpayer money.

Kennedy described his vision by building on the past while looking to the future. In his speech, he characterized space as a new frontier, invoking the pioneer spirit that dominated American folklore. He infused the speech with a sense of urgency and destiny, and emphasized the freedom enjoyed by Americans to choose their destiny rather than have it chosen for them. At the time, neither the technology nor the organizational capacity existed. Yet, Kennedy’s goal was realized in July 1969 with the successful Apollo mission. His vision drove a decade of innovation and change in America.

Presidents and other executive leaders must focus their leadership and management skills on defining and attaining the vision, its goals and objectives. It is the future of their university or college that is at stake. This requires hard work, clear focus and a measure of courage. Changing demographics of both the workforce and student enrollment along with the many other disruptive forces impacting higher education institutions require a more intensive leadership for harnessing and managing breakthrough and sustaining innovations as part the change process. Every institution is designed perfectly for achieving the results it does. In our coaching and consulting work, we stress that the need for change requires a new curriculum and training for leaders on how to do different, differently. Also, requisite is not diluting the president and cabinet’s focus on the institutions organizational objectives (OOs) with too much time spent managing personal preferences (PPs).

Trap #2: Not sharply focusing enough time and energy on core leadership functions.
This trap is like a spider’s web. It is very easy to get into but almost impossible to get out of. Very often the skills and behaviors that resulted in a president being hired are not the ones that will ensure success. We believe that leaders are made and not born, and leadership skills can be easily learned but in the early stages may be difficult to apply. Leaders need to clearly assess the culture of the institution and its history. They need to determine what leadership traits they have that are well suited to their current role and what leadership skills they need to strengthen modify or drop. The higher the position is on the executive ladder; the more time is required for the leadership function. Here lies the challenge between what we call OOs (Organizational Objectives) and PPs (Personal Preferences).

Accountability for institutional leadership roles and responsibilities cannot be delegated. Responsibility for management functions can. Letting go of PPs and focusing on OOs seems easy but it requires leaders to admit they need to do so and not rationalize why they are not willing to change or cannot see the reasons for doing so.

Here are a few insights shared with us that illustrate leaders being trapped:

Trap #3: Tolerating poor performance by “not putting the heat where the heat goes.”
Not holding people accountable for quality performance erodes a positive organizational work culture. It creates resentment by others who have to fill-in to make sure that the work is done. A positive culture encourages offering help and asking for help. But having to rescue projects and performance by doing someone else’s work is not. Leaders need to focus on the big strategies and goals and to make sure that their direct reports do not delegate back to them. Apparently from the comments we hear this is a very hard concept to implement.

A complaint heard from several presidents was their being trapped by the need for them to proof read, edit or rewrite important and sensitive reports or documents that staff prepared for them. By doing so, they are telling staff that they accept substandard work. Documents that need to be reworked should be returned with a note that requests a finished product. If the person who has responsibility for preparing the work does not have the skills to so, that person, not the leader, should find the resources for doing so.

Another example in this trap comes from a president who paralyzed his institution because he felt he had responsibility for making sure everything important was his responsibility to oversee. His leadership was limited by his overwhelming need for micromanagement based on his lack of faith in his subordinates. Moving areas under his direct supervision that he felt were not performing to his expectations was corrosive and demeaning to all involved. This was an institution where reporting directly to the president was not a bragging right of importance. It was joked that it looked better on the forthcoming edited resume than it did in the workplace. This president was proud of his leadership style. However, he was not perceived on his campus as either a good leader or a good manager.

A president I knew well refused to be trapped by poor staff performance. He posted a sign in his office that stated, “Lack of planning on your part does not create an emergency on mine.” He was tired of getting complex documents to read and sign just under the deadline required for submission that that forced him to change his plans. When the university did not submit the document under these conditions, the person who created the problem got “the heat” for the failure.

Trap # 4: Assuming only those in administrative positions or network have skills that can move the institution forward.
Universities and colleges are one of the greatest pools of talent that exist in our society. In our work with campuses on leading innovation and change we have encouraged leadership to identify people with a variety of hidden talents. For instance, we have seen professionals in human resources who can help with facilitation of ongoing projects that we help initiate. We have seen sociologists and organizational behaviorists who are happy to volunteer to help analyze campus culture; campus counselors who know firsthand key student issues and concerns, statisticians and demographers, and a host of others who told us that our invitation was the first time anyone cared enough to ask them to help. Since they were not part of the leadership network, they were overlooked. Although they were not able to lead a strategic change initiative, they provided tremendous service to make one very productive. As we have noted, people support what they help to create. The search for “hidden” skills and talents resulted in faculty and others becoming involved in ways that could not happen otherwise. As a result of their involvement, they became active in generating support from their colleagues for the new initiatives being proposed.

Trap #5: Letting killer phrases quash new ideas.
Have you ever heard statements like these when a new project or initiative is proposed, let alone something as audacious as Kennedy’s moon shot?
Resistance to innovation and change comes in the form of comments like these to any new idea that disrupts the status quo:

Since all change is first viewed through the lens of “how does this affect me,” killer phrases are clues to campus readiness for innovation and change. Visionary leaders are in the best position to lead and inspire their institutions about the need to innovate and change to survive. They not only have the vision but the power and resources to make things happen that others may think are impossible to achieve. But doing so is a team effort and requires strategies not only about what needs to be changed but how people have to change to make it happen.

Something to keep in mind from a leader who didn’t see the future coming:

“I cannot imagine any condition which would cause a ship to founder. I cannot conceive of any vital disaster happening to his vessel. Modern shipbuilding has gone beyond that. I never saw a wreck and never have been wrecked, nor was I ever in any predicament that threatened to end in disaster.” (Quote from Future Titanic Captain Edward Smith)

Nothing more to say if you think this is not the time for leading innovation and change that avoids these traps and allows leaders to shape the future. If, however, you are interested in knowing how to develop your own responses to these challenges, you can download a free guide to more effective leadership or contact us for a free initial consultation.

About the Author: Laurence Smith